The History of Android’s Design

Donut, Jellybean, cupcake, and even lollipop. No, I’m not talking about just delicious candy but the famous and unique Android systems, instead. Android is incredibly popular for its numerous technological devices and systems, but also for its logo’s mascot. The green robot is always present wherever the brand is, and over the years a lot of changes were made to it, including its overall design. That’s what I’m here to write about today, so let’s dig deep down android’s memory lane, from the birth of this brand to the present days, shall we?

This famous OS system came to the world in 2008 and the adorable green robot we all love was designed by Irina Blok. Although this logo was not to be released to individual clients, this cute creature got through people’s hearts, so google decided to use it as the official logo. But where did this green robot come from? Blok was asked by Google to create a symbol with a robot, and, still today, there’s a lot of debate when it comes to the original inspiration for the Android image. Some say it was inspired by the popular R2-D2 character, from Star Wars, and others say it was stolen from an Atari video game, where the protagonist was also named android, but the real answer? Bathroom doors!

We all know the common men and women silhouettes usually found on a public bathroom door, right? Simple but memorable might have been what Irina thought, so she decided to take off the idea from there. Using the name of the company, she created the mascot according to its meaning, since Android is a robot resembling humans. With no official name, the Android mascot started being called “bugdroid” by the android team and it still is the unofficial name people use when referring to it. Bugdroid became famous and started popping everywhere to the point where all types of merch were created with the image of the cute green robot. So, if you adore bugdroid you can always get a keychain and take him with you wherever you go.

Green is The Warmest Color

Wherever and whenever we see that little robot there is always something with it: Green. These two go together like shoes and socks. But why green? The color was chosen according to its meaning – the “android green”, curiously, there is a Pantone named exactly that, but the real motive is because it represents progress, freshness, and uniqueness. Yet, this doesn’t end here, as it will forever be known for the green shade, but the creator’s intention for the robot was open-sourced. They decided to let the creativity flow around users worldwide, and therefore create a logo that could be customized by millions of people in their own way. A real game-changer and challenging, as many companies thrive not to have their trademarks used or copycatted, the android dares people to find their own image. As once Irina said, the logo was like raising a child – you give them life and then they have a life of their own. In 2014 the first change occurred, when Google decided to change the logo, making it all lower cases, with white color and a more clean look. 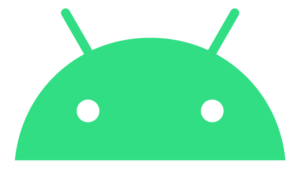 Since then, only in 2019 Google decided to shake the android up a little bit again and introduced us to a new, fresh, logo. Like the brand itself, this logo continues subtle and simple. The android lettering will now always be accompanied by the bugdroid’s head, but that’s not the only thing new, as the body is gone. From now one, wherever the logo is, the head is there, next, under or above. Besides all that, there’s another difference in the colors, as google released a new palette for the brand, even though it’s still based around the famous “android green”.

Millions of people everyday use their androids, I mean, I would even go as far as always having it around me, everywhere I go. Nowadays, it’s definitely essential, especially our phones, as we use them for a lot of things, even for work, or, for example, for writing this article! The design of a brand is always important when it comes to choosing any product and android is no different, although throughout the years, the changes weren’t huge, neither many, for such a big brand, and the millions of customers continue to love it, especially the lovely mascot. What did you think of the brand’s history? The bathroom one really surprised me. Tell me in the comments your favorite aspect of the bugdroid and thank you for reading.